‘Curry gonna be on the all-time blooper reel for that!’ NBA megastar suffers embarrassing moment as he slips while attempting showboat dunk during Golden State win over Lakers

By Adam Shergold for MailOnline

When Stephen Curry has a completely clear path to the hoop you’d bet your bottom dollar on him scoring.

But the Golden State Warriors star suffered a rather embarrassing moment on Monday night while attempting a showboat finish to his break.

It was during the third quarter of the Warriors’ match at the Los Angeles Lakers that Curry intercepted a terrible opposition pass deep inside his own team’s territory. 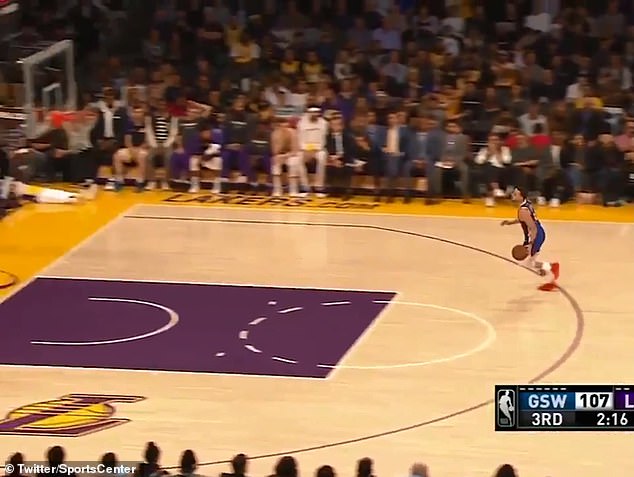 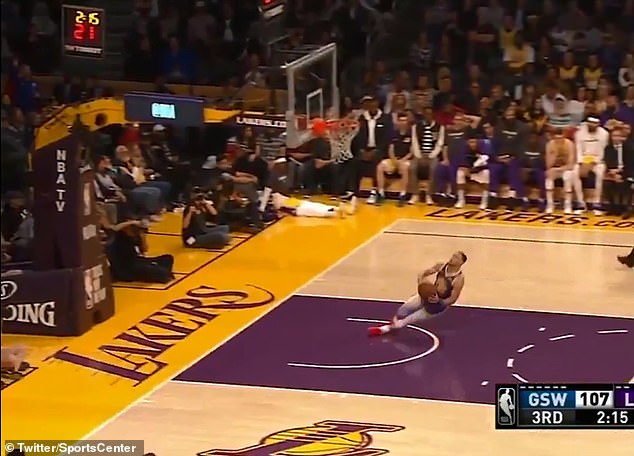 But as he prepares for the showboat dunk, Curry slips on some moisture on the court 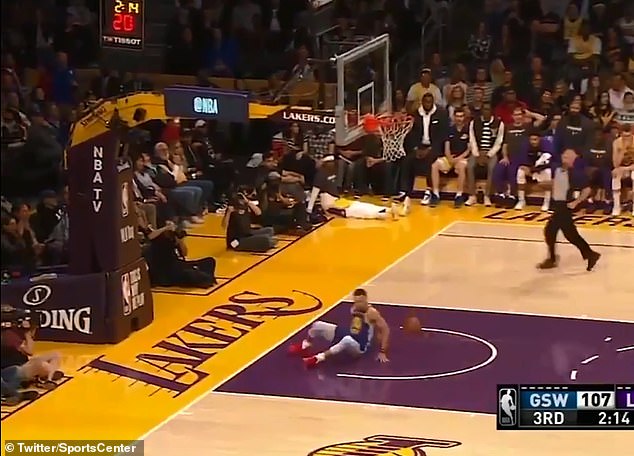 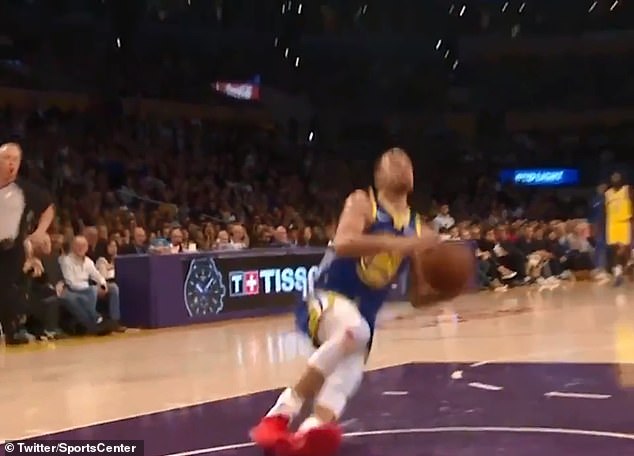 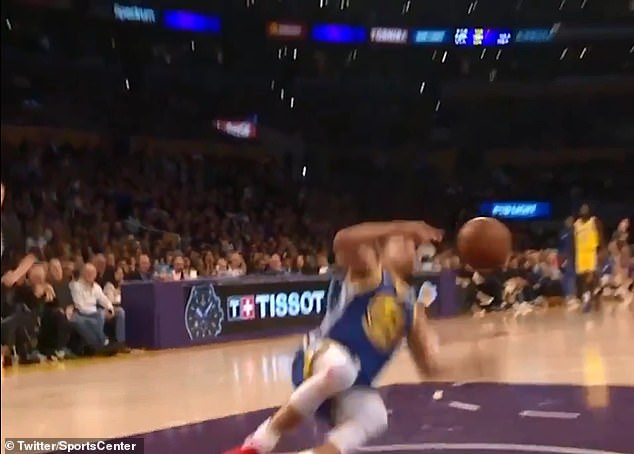 He was left completely unchecked as he raced towards the unguarded hoop and had more than enough time to attempt something for the season highlights reel.

But just as he prepared to take-off, Curry slipped and was sent sprawling on his back.

Though red-faced, Curry, to his credit, was immediately back on his feet to attempt a three-point shot, which was nowhere near the target.

Curry was brought off moments later but was seen having a laugh about his gaffe with Draymond Green as it was replayed on the big screen at Staples Center.

Not that it mattered too much in the end, as the Warriors won 130-111 to extend their winning streak to eight and keep their place atop the NBA Western Conference.

Curry saw the funny side afterwards, saying: ‘Back to back hilarious plays, it happens to the best of us.

‘I was like a kid walking to the candy store with half the court empty, I was going to try something really nice that I haven’t tried before and the Lord wouldn’t let me do it.’ 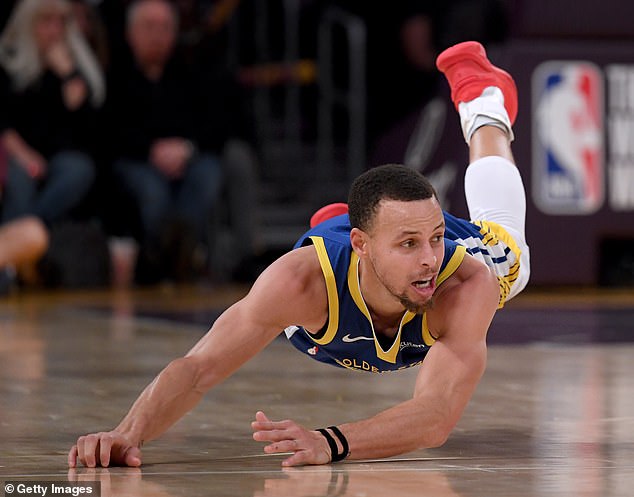 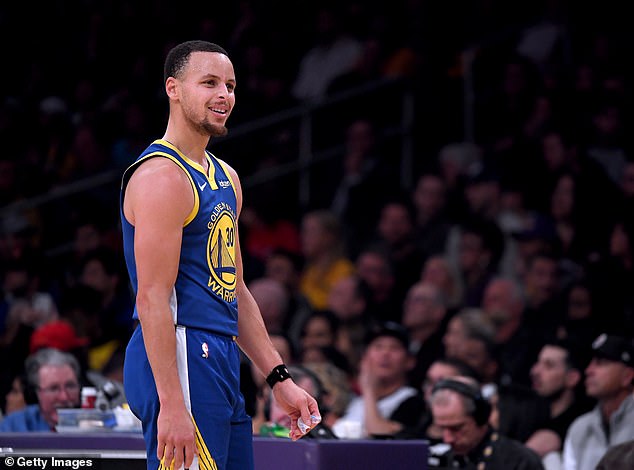 The Staples Center is a versatile venue that can be switched from an ice hockey rink – the Los Angeles Kings play home matches there – to a basketball court in just a few hours.

It was suggested that moisture from the ice sheet underneath had seeped through and created the slippery spot that claimed Curry as a victim.

But there wasn’t much sympathy on Twitter as fans were quick to mock.

Sports broadcaster Harrison Faigen tweeted ‘that was without doubt the worst sequence of Stephen Curry’s career’ while Philiana Ng posted ‘Steph Curry’s slip is the blooper of the season.’

Martin Gallegos posted: ‘Oh man… Curry gonna be on the all-time blooper reel for that LOL.’

Steph Curry’s slip is the blooper of the season.

Oh man.. Curry gonna be on the all-time blooper reel for that LOL

Luckily, Klay Thompson was in sensational form for the Warriors, setting an NBA record by making his first 10 attempts from 3-point range and scoring 44 points in total.

Thompson was successful with 10 of 11 shots from beyond the arc as the two-time defending champions won their seventh consecutive game on the road.

Kevin Durant added 20 points and Curry had 11 points and 12 assists for Golden State.

Ivica Zubac led Los Angeles with 18 points. The Lakers were without their primary playmakers in LeBron James, Lonzo Ball and Rajon Rondo.

They fell to 5-9 without James, whose left groin strain has forced him out for the longest stretch of his 16-year career. 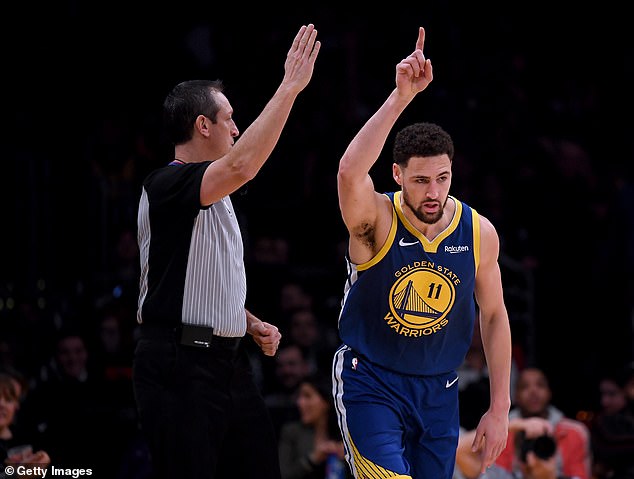 Klay Thompson was in excellent form, scoring 44 points as the Warriors won again on the road

Treating Mild Cases of Coronavirus Could Save Lives

"Loud And Clear, Tourism Industry On Its Own": MakeMyTrip Founder To...

Treating Mild Cases of Coronavirus Could Save Lives