Actor-singer Shruti Haasan celebrated her birthday on 28th January 2021. The diva has turned 35 years old, and she posted on Instagram revealing how important this year has been for her. “This has been the best phase of my life and I’m thankful for my lessons and the journey …ive grown and changed in ways that have shaped my vision of the future,” she wrote with her birthday post. Balloons, streamers, a special tiara and two delicious chocolate cakes marked Shruti Haasan’s 35th birthday celebrations. Take a look at the pictures of Shruti Haasan cutting her birthday cakes: 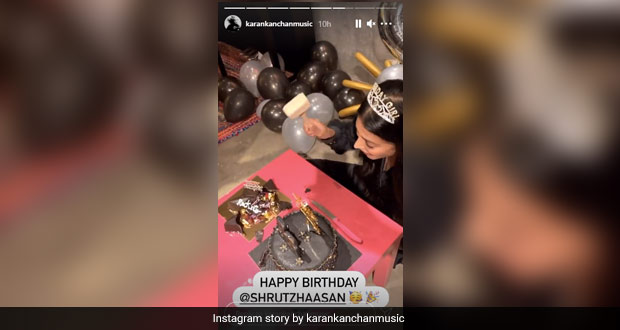 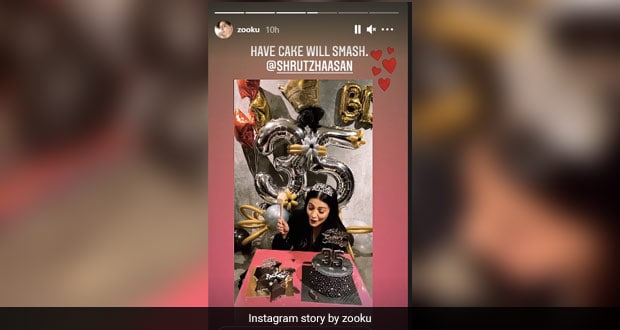 Shruti Haasan celebrated her special day with not just one, but two decadent and delicious chocolate cakes. “Happy birthday rockstar,” read one cake which was in the shape of a star. Shruti Haasan shared a video of her smashing the cake’s hard chocolate exterior with the help of a miniature hammer. The chocolate gave way to a soft and colourful sponge cake filled with strawberries and buttercream. Both the cakes were covered with a delicious chocolate icing and colourful chocolate sprinkles. Thanking everyone for the surprises, Shruti Haasan wrote, “I want to take a second to say a giant THANKYOU to my virtual family for making my birthday so special.”

Interestingly, this wasn’t the only cake that Shruti Haasan cut on her birthday. A few days back, she shared a click of a divine chocolate truffle cake that she apparently received from her fans. Take a look:

“Early birthday wishes from my lovely (secret) crew,” she wrote in the caption of the post. She also used the hashtags: #happyme #besttimeever #ilovecake #grateful along with it.

Here’s wishing the actor on her special day, and we hope to see more glimpses of her foodie diaries soon! On the work front, Shruti Haasan was last seen in the superhit film ‘Krack’. Her next project will be ‘Salaar’, which is her maiden collaboration with superstar Prabhas.

Galaxy S21 releases tomorrow: Your last chance to get Galaxy Buds for free

Indian Cooking Tips: How To Make Quick And Easy Sulemani Paratha (Recipe Inside)

Quick And Easy Recipe: This Shimla Mirch Aloo Sabzi Is Ready In Under 30 Minutes!

How To Make Aloo Gosht – A Home-Style, Spicy Mutton Recipe From Rajasthan

Not Again! Croissant Vada Pav Is The Latest Bizarre Combo To Divide Twitter