THE Royal Family have paid heartwarming tribute to Prince Philip on the eve of his funeral and revealed the “unique touches” the Duke planned for the ceremony.

The Duke of Edinburgh passed away “peacefully” at the age of 99 last Friday at Windsor Castle.

Ahead of his funeral tomorrow, the Royal Family revealed on their Instagram account that the late Duke was “closely involved” in planning the day.

The first Instagram story read: “As a result, it will involve a number of unique touches which reflect his life and work.”

Sharing a photo of the Duke in uniform, they added: “Many of the moments choreographed by The Duke demonstrate his lifelong commitment to the Armed Forces.”

Yesterday, the Royals revealed that Philip accumulated 5,986 hours as a pilot in 59 types of aircraft after gaining his RAF Wings in 1953.

The tribute continued: “The Duke’s association with the Royal Marines lasted for his entire life.

“He was made Captain General in 1953 and his final official engagement ahead of his retirement was a Royal Marines Parade at Buckingham Palace.”

What’s more, the Royal Family also highlighted how Prince Philip became the Colonel of the Grenadier Guards in 1975 which involved visiting the UK battalion and witnessing overseas operations.

“The Grenadier Guards are an elite British Army infantry regiment known for their red tunics and bearskins,” the post explained. “They can often be seen guarding the Royal residences.”

They then shared a photo of Prince Philip surprising the Queen in uniform outside Windsor Castle in 2003.

During tomorrow’s ceremony, Prince Philip’s coffin will be carried by the Grenadier Guards and the Royal Marines.

The Queen’s Royal Hussars – which is the most senior armoured regiment in the British Army – also paid their respects to the Duke of Edinburgh who was their Colonel-in-Chief from 1953.

Sharing a black-and-white photo of the Duke, the post read: “The regiment’s tribute to the Duke following the announcement of his death, remembered him as… 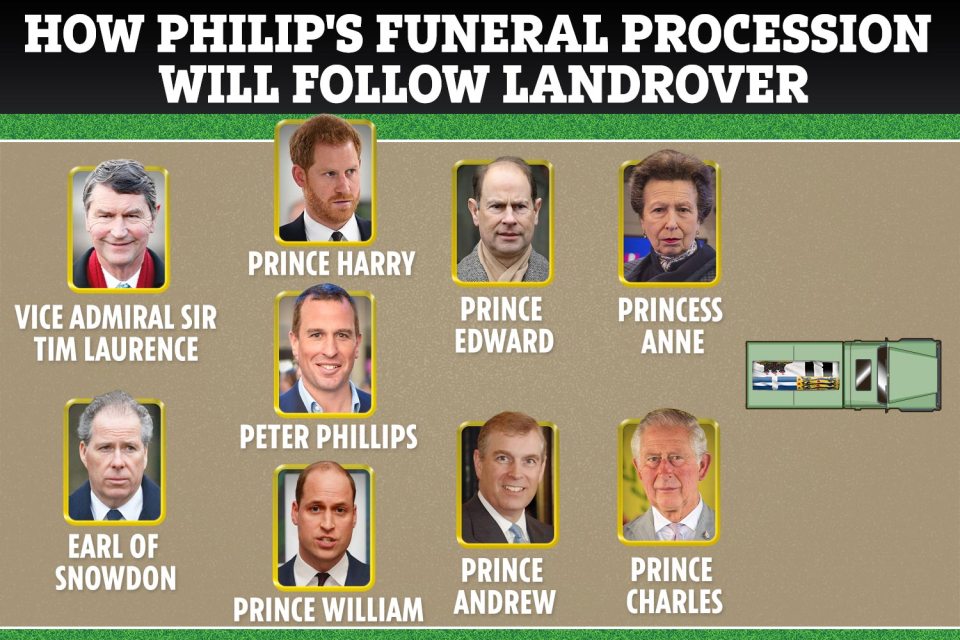 “‘Tough, tested in war, direct but with an acute sense of humour, he had a piercing interest in the Regiment, its people and activities.”

What’s more, the Duke also helped design the Land Rover which will carry his coffin to the funeral at St George’s Chapel.

“The vehicle will be driven by soldiers from the Royal Electrical and Mechanical Engineers of which The Duke was Colonel-in-Chief,” the post added.

The Duke started designing the vehicle in 2003 and finalised the project in 2019 at the age of 98.

The Palace said yesterday that music requested by Philip in funeral plans have been specially-adapted to cope with Covid rules.

Most read in Celebrity

HEIR ALL ABOUT IT


Who is The Queen’s Lady in Waiting Susan Rhodes?

In more Royal Family news, The Queen is ‘touched’ by public’s support since Prince Philip’s death as she sends message ahead of funeral.

And pregnant Meghan Markle will make ‘private arrangements’ to mark Duke of Edinburgh’s life after not being able to attend.

Plus Prince Harry and William won’t stand next to each other at Philip’s funeral with Peter Phillips to separate pair.

$1.2 million worth of cocaine washes ashore on Alabama beach

$1.2 million worth of cocaine washes ashore on Alabama beach 0

Meghan Markle and Prince Harry's daughter: Second child will have a 'formidable intellect' 0