ALMOST a quarter of registered Covid deaths were not caused by the virus, new official figures reveal. Data from the Office for National Statist

ALMOST a quarter of registered Covid deaths were not caused by the virus, new official figures reveal.

Data from the Office for National Statistics shows 23 per cent of coronavirus fatalities are now people who have died “with” the virus rather than from an infection.

* Read our coronavirus live blog for the latest updates

This means the disease was not the primary cause of death recorded on death certificates, despite the person who died testing positive for Covid.

Other data also shows an increasingly positive picture of the state of the pandemic in Britain.

Daily death figures by “date of death” reveal that Britain has had no more than 28 deaths a day since the beginning of April.

Meanwhile, the government announced deaths have been as high as 60.

This is because officials give a daily update on deaths based on the number reported that day, which can include deaths from days or weeks previously.

It means the government figures may not reflect the true decline in deaths.

A further 23 Covid deaths were reported on Tuesday – more than half those recorded a fortnight ago – but the true daily figure could be even lower.

Elsewhere, Oxford University has calculated that the number of people in hospital with an active coronavirus infection is likely to be around half the current published daily figure.

There were 2,472 new infections reported on Tuesday, with 2,537 Covid patients in hospital and 230 new admissions.

But again, these totals could be significantly lower.

The revelations – and the nation’s impressive jab rollout –  is likely to put increasing pressure on the government to open up the country sooner.

A whopping 40,107,877 doses of the Covid vaccine have now been administered in the UK.

As the roll-out speeds ahead, anyone aged 45 or over can now book a vaccine appointment through the NHS website after Phase 1 of the vaccine programme was completed three days early.

Brits have this week flocked to pubs, shops, hairdressers and gyms after they opened for the first time since January as Covid restrictions eased on Monday.

But Boris Johnson has warned that the falling Covid deaths are thanks to Britain’s lockdown NOT the vaccine.

The PM claimed that “the bulk of the work” was done by people staying inside and not Britain’s world leading jab rollout.

He also warned that cases would go up and urged the nation to continue to be cautious as they head back to the pub. 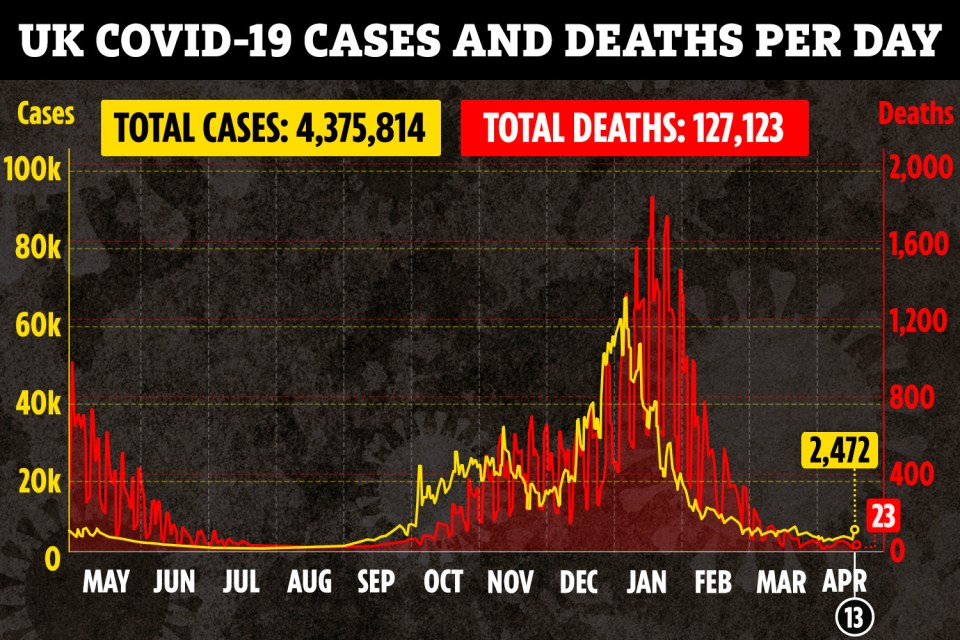 This week’s vaccination rollout to under-50s marks the start of Phase 2 of the government’s vaccination programme, with the PM hailing it as a “hugely significant milestone”.

And in further good jab news, NHS patients are set to receive the Moderna vaccine imminently.

The vaccine will be the third Covid jab to be dished out in Britain and will be available at 21 sites in England, officials confirmed.

Professor Stephen Powis, medical director for NHS England, said its “marks another milestone” in the country’s battle against Covid.

Moderna offers an alternative to the Oxford-AstraZeneca vaccine for under-30s after concerns about a possible link to very rare blood clots.

AXE ON THE MALL


Dying 'kidnap victim', 47, found in boot of car after cop chase is named


Meg 'should be quiet' if not wanting to be 'centre of attention', blasts expert

But despite the successful vaccination programme, an Oxford academic has warned the PM’s roadmap out of lockdown could be delayed because the UK faces a fresh Covid surge as restrictions ease.

Dr Peter Drobac, a former assistant professor at Harvard Medical School, warned there will be a spike in cases as Brits enjoy their new-found freedoms.

And he said that unless we take it slow and steady, Britain could face a similar future to Chile – which has just gone back into a strict lockdown, despite one of the world’s best vaccination programmes.

The gross reason Prego spaghetti sauce is trending on Twitter 0

Microsoft Outlook: Are you struggling with ‘cannot send’ email error? We have good news 0

Covid-19 Surges in Northeast, Upper Midwest, but not South 0