PUNCHESTOWN FESTIVAL kicks off with a bang on Tuesday. There are big names after big names and our man Templegate has been busy in the formbook.

PUNCHESTOWN FESTIVAL kicks off with a bang on Tuesday.

There are big names after big names and our man Templegate has been busy in the formbook. 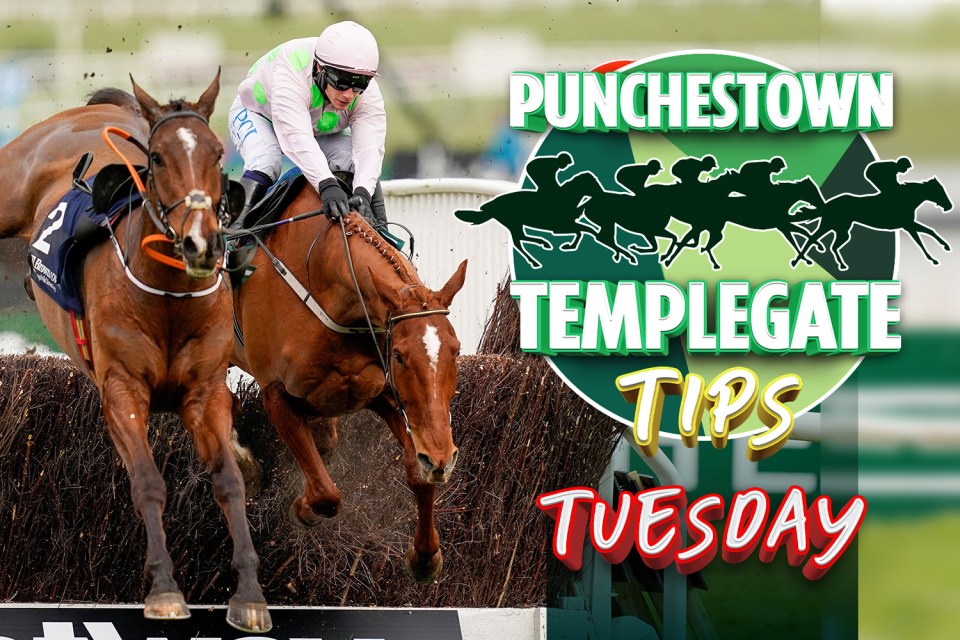 SCHOLASTIC ran well in a Cheltenham Grade 2 earlier this month when a close-up second. She relished this trip on decent ground there and a 2lb rise in the weights gives her every chance.

Clever Currency makes his handicap hurdle debut here on the back of an 11-length novice success at Limerick. There should be a lot more to come.

Fighting Fit would probably like it softer but was a good third at Fairyhouse last time and looks capable of better. Ya Ya Baby looked a nice prospect when scoring at Cork three weeks ago. She has a handy mark moving into handicaps for Jessica Harrington.

OFFERS OF THE DAY

T&Cs: Bet £10 on any race at Punchestown, between Tuesday 27th April – Saturday 1st May — Get £60 in racing free bets. Only deposits via cards or Apple Pay will qualify. Free bets will be awarded after the qualifying bet has been settled. T&Cs apply. Paddy’s Rewards Club: Get a £10 free bet when you place 5x bets of £10+. T&Cs apply. 18+ Begambleaware.org

ECHOES IN RAIN won a Fairyhouse Grade 2 by an impressive 15 lengths and looks well up to this top level. She hit the front heading to the last and cleared right away. The only worry is this quicker ground but she is bred to cope with it and looks a real prospect.

Stablemate Blue Lord looks the danger despite falling in the Supreme Novices’ Hurdle at Cheltenham. He was third in a Leopardstown Grade 1 before that and can bounce back.

Dewcup has decent form over course and distance at a lower level. He is fit from a spin on the Flat but needs to improve.

Most read in Horse Racing


When is Punchestown Festival 2021? Dates, tips and runners for season finale

JAZZAWAY has been off since running a cracker in second at the Galway Festival. She went down in a head-bobber there and is effectively 3lb higher thanks to her rider’s claim. This trip is ideal and she can go close.

Willie Mullins runs six others including Gentleman De Mee who put in a respectable show at Cheltenham when backed off the boards. Another market move would be telling.

Blackmore and De Bromhead team up with Champagne Gold who was also popular at the Festival when disappointing in the County Hurdle. He went close at Leopardstown before that so is feared. Magic Tricks is lightly raced and was just half a length away at Fairyhouse so should run well.

Willie Mullins holds a strong hand all week at Punchestown[/caption]

CHACUN POUR SOI can get the better of Allaho over this trip. He was a little below par when third in the Champion Chase at Cheltenham but was still only just over a length away. He landed back-to-back Grade 1s at Leopardstown before that and his pace will be an asset at this distance.

Allaho was brilliant when winning the Ryanair at the Festival but he needs to improve again dropping back to this trip.

Nube Negra could be the biggest danger given he finished a place ahead of the tip at Cheltenham. He may have won with a better jump at the last and trainer Dan Skelton rates him very highly.

The ultimate home for all your racing needs.

Number one for tips, betting offers and news – as well as full racecards and an interactive results and odds comparison service.

Given the yard’s record in the race with the past two winners, the Denise Foster runners can have a big say with NONBINDING looking the pick. He’s the half-brother of Ferny Hollow who won the Champion Bumper. He has a top pilot in Jamie Codd on board.

Keep an eye on the betting for clues about stablemate Laffite who comes from the family of Voy Por Ustedes. Hemlock got a rough run when fifth on debut for Willie Mullins at Clonmel and should be sharper for it. Huntingtown was a close fourth in a big field at Fairyhouse and should build on that. 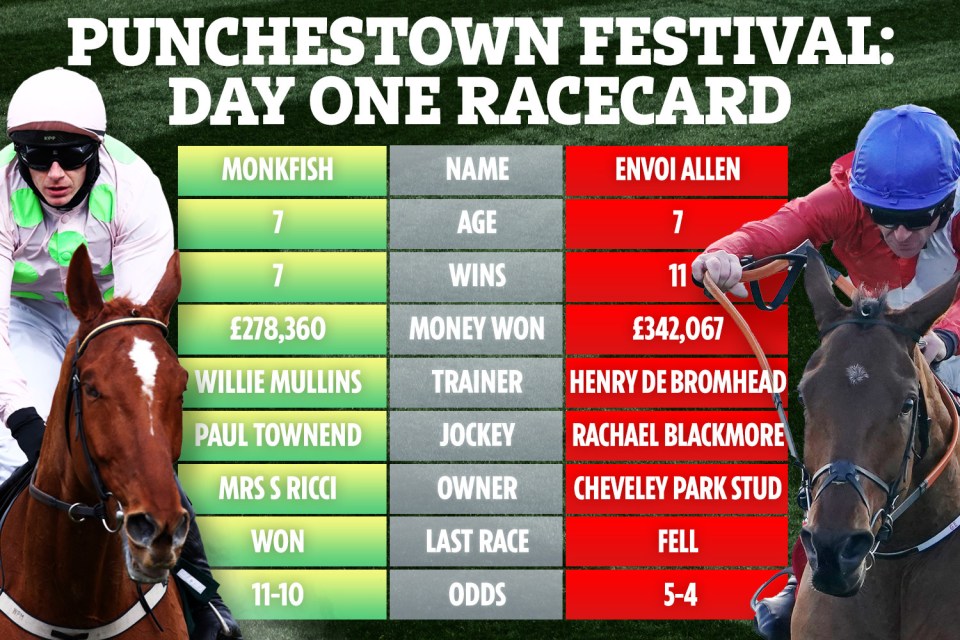 MONKFISH was superb in landing his fourth Grade 1 win at the Cheltenham Festival last month. He didn’t have to leave first gear in going from the front and running them into the ground. There’s more to come and he’s on the road to next season’s Gold Cup.

Envoi Allen was a rare blip for Blackmore and De Bromhead at the Festival with his early tumble in the Golden Miller. He was good over shorter before that and it’s still early days over fences but even his very best shouldn’t topple Monkfish.

Colreevy battle well to take the Paddy Power Mares’ Chase at Prestbury Park and deserves to be here. She needs the step up in distance to bring lots of improvement.

Enda Bolger has won this five times in eight years and YOUCANNOTBESERIOUS can improve on his second from this race in 2019. He’s not been out since but he’ll be fit to go and has Derek O’Connor on board.

Stablemate Saint Benedict has yet to win but it’s early days and he’ll be fully tuned up too. Jamie Codd is on Vital Island who was second in the 2019 La Touche Cup. He’s not fired since but gets fast ground for the first time since so has solid place claims. Fiston Du Mou showed promise when fourth at Cork earlier this month and should go well again.

MYTHICAL HERO showed promise when a close-up third on debut here last month. He travelled well and just tired late on. You would expect him to improve on that.

Hara Kiri was third at Gowran first up and is likely to take a major step forward for Team Mullins. Donnrua Dream is another who caught the eye on debut with a decent Clonmel effort. He doesn’t need much more to figure again.

Hedos De Berce is bred to run well in Bumpers with his sire producing lots of winners. He could hit the frame at a big price.

Commercial content notice: Taking one of the bookmaker offers featured in this article may result in a payment to The Sun. 18+. T&Cs apply. Begambleaware.org

A responsible gambler is someone who:

How Do You Feel About the New Mask Guidelines?

How Do You Feel About the New Mask Guidelines? 0