By Kate Dennett For Mailonline

This is the heart-stopping moment a paraglider has an almost fatal fall when his parachute collapses and tangles around him thousands of feet above ground.

The clip, filmed on March 6 above Les Pleiades mountain in Switzerland, shows the experienced paraglider’s incredibly close call when his chute falls in front of him before flying towards him and getting caught around his body.

The French paraglider tries to untangle the chute so he is able to pull his emergency parachute. 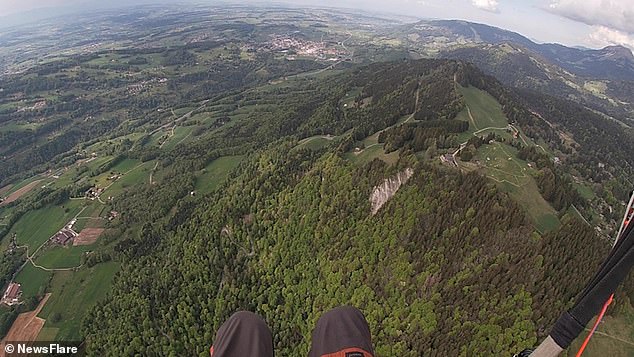 A video, filmed on March 6 above Les Pleiades mountain in Switzerland, shows an experienced paraglider’s nearly fatal fall when his chute stalled (pictured before the chute collapsed) 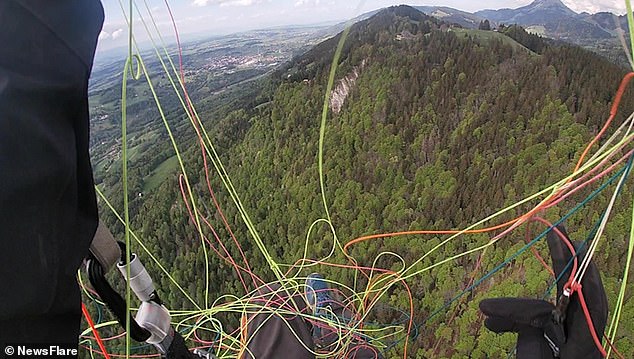 In the heart-stopping moment, the French paraglider’s chute fell down in front of him before getting tangled around his body

The man, who wishes to remain anonymous, falls for around 20 seconds before he is able to release his emergency chute, saving him from the fatal fall.

The glider manages to recover from the near-death experience and guide himself towards a safe landing in a meadow, remarkably without injuring himself.

He shouts with relief after his lucky escape as he begins untangling himself from the chute.

The paraglider was flying thousands of feet above the Pleiades Mountains, which have an altitude of 1,361m (4465ft). 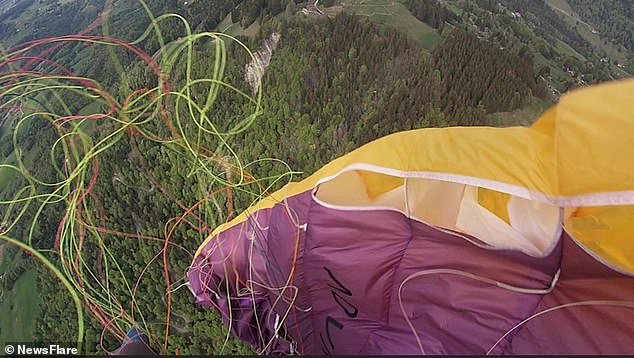 The 32-year-old was flying thousands of feet above the Pleiades Mountains at the time, which have an altitude of 1,361m (4465ft) 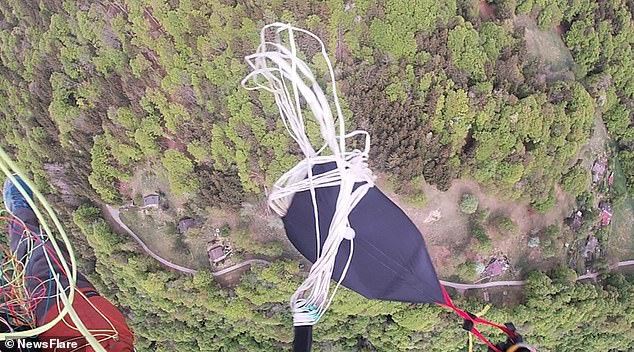 The man fell for around 20 seconds before managing to reach his emergency chute (pictured) and releasing it, saving him from a fatal fall onto the mountain 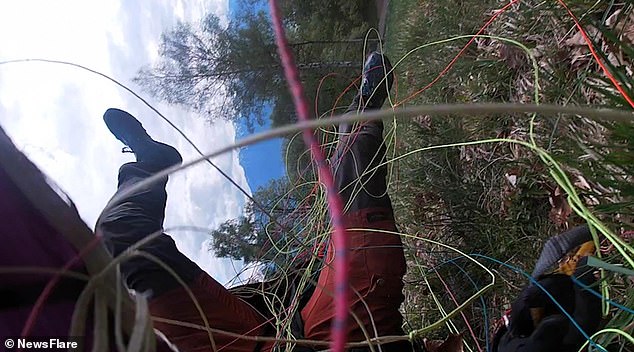 The glider, who wishes to remain anonymous, managed to guide himself towards a safe landing in a meadow, remarkably without injuring himself

He said: ‘It took me several days to realise what had happened as I was in a state of shock, I didn’t realise. I now realise how lucky I was.

‘I am 32 years old and I have been adventuring for 15 or 16 years. I am also a kayak instructor, mountain bike instructor – I supervise the groups. And I am aware of the risks, I like to push my limits and I take all the precautions but sometimes things go wrong.’

He explained that at first the conditions were calm and the flight started quietly but after stalling he found himself in an emergency situation ‘which could have been fatal’.

It was a miracle the paraglider escaped the fall without a scratch as even after releasing his emergency chute, he still could have landed on rough terrain.

He said: ‘I landed in a meadow between two forests without any injury or material damage as if an angel had protected me.’

Are the Cook Islands, in the Pacific Ocean with dreamy beaches, the most beautiful in the world?

As European resorts finally start to re-open… What's going on in our holiday hotspots?

Kerala To Quarantine People Coming To State Via Flights. Some Exemptions