Take a look at what Padma Lakshmi made at home for Kamala Harris.

United States’ Vice President-elect Kamala Harris will be swearing into the post on 20th January 2021 at 10 PM IST. She is the first African-American of Indian origin to be elected to the post, thus making it a historic win for the community. Kamala Harris has often spoken about her Indian roots from her mother’s side, also opening up about her all-time favourite Indian foods. From the South Indian Idli-Sambar to the North Indian Tikkas, Kamala Harris has confessed to loving Indian food and how. Television show host and cookbook author Padma Lakshmi decided to honour the new American Vice President in her own unique way. Padma Lakshmi took to Instagram to share a recipe video of the South Indian favourite Tamarind rice, revealing that it was one of her and Harris’ favourites. Take a look:

(Also Read: Mindy Kaling And Kamala Harris Share Love For This Indian Dish. Can You Guess?)

“We made Tamarind Rice in honour of our new VP @kamalaharris. I know we’re all waiting on tomorrow with bated breath. Here’s one of my (and Madam VP’s) favourites to tide you over, (sic)” wrote Padma Lakshmi in the caption section. She began the video by explaining the recipe that they would be making today and how it was a shared favourite among the duo. “So in honour of our new vice president, Kamala Harris, I’m making today a typical South Indian rice that happens to be her favourite as well as mine,” she said in the video.

The 11-minutes-45-second clip began with Padma Lakshmi making a simple Sambar powder made with fenugreek seeds, coriander seeds, black pepper and a few more whole spices. Then, she began the preparation of Tamarind paste with some pureed Tamarind which was soaked in hot water for 30 minutes. Meanwhile, Padma Lakshmi sautéed some basic ingredients of the rice including mustard seeds, whole red chillies, curry leaves and peanuts. The Tamarind paste was then added to this and allowed to cook for a while. Interestingly, Padma Lakshmi mixed in the rice into the tamarind paste by hand. The Tamarind Rice recipe doesn’t get more authentic than this! 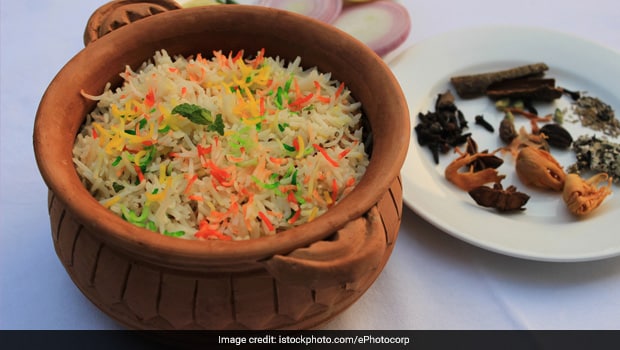 Tamarind rice is one of the much-loved rice recipe in the South.

What a great way to celebrate Kamala Harris’ historic win, right? We hope to see more of her favourite recipes being cooked on the internet. What did you think of the Tamarind rice recipe? Tell us your thoughts in the comments below!

From Nihari, Galouti To Korma, Khansaama's Mughlai Fare Is Here To Impress

Burger King France Gave Away Free Potatoes To Customers; The Reason Will Impress You