Masters 2021: Justin Rose fights back from awful second round start to hold onto Augusta lead at halfway stage

JUSTIN ROSE is still the man to chase at the Masters, after another brilliant back nine surge at Augusta. The English golfer was in danger of di

Tommy Fleetwood hits brilliant Masters hole in one while Justin Rose steals the show to top Augusta leaderboard
Paige Spiranac stuns in low-cut top as she wears green all week during The Masters at Augusta
Masters 2021: Justin Rose fights back from awful second round start to hold onto Augusta lead at halfway stage

JUSTIN ROSE is still the man to chase at the Masters, after another brilliant back nine surge at Augusta.

The English golfer was in danger of disappearing into the pack after playing just first seven holes in three over par. 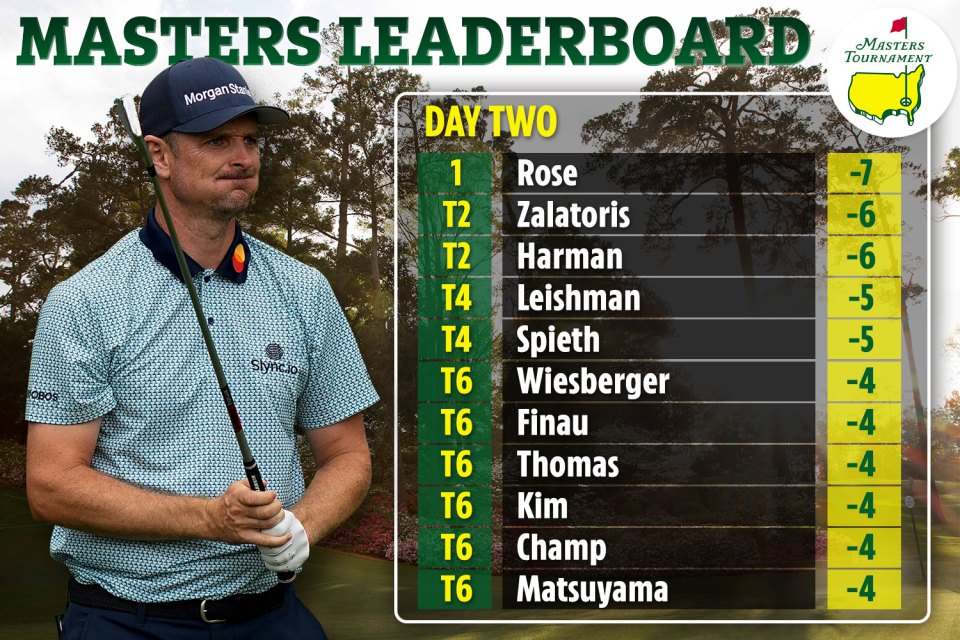 But a late burst of three birdies on four holes hoisted him back to the top of the leaderboard on seven under.

That was the number Rose, 40, had started on, and the 2017 Masters runner-up is confident of going one better this time.

He said: “I just had to be patient early on because I know this place always inspires me, and that good things would happen.

“I was kind of waiting for that ‘boom moment ‘ that I got on day one with my eagle on eight. This time I made a great birdie on 13 and then threw in a couple more, so I’m still sitting pretty”.

Rose showed his fighting qualities just when it looked like he would come crashing back to earth after his high flying feats in the first round of the Masters.

Rose seemed to be the only player with the answer to Augusta’s rock hard and scary fast greens as he ramped into a four shot lead with a brilliant 65.

But it looked like his immunity to the general chaos had ended as he gave three shots back with a nervy start.

GRAND NATIONAL: GET £130 IN FREE BETS FOR FESTIVAL AT AINTREE

But he steadied the ship with back to back birdies at 13 & 14 to ensure he is still in prime position heading into the weekend.

Rose’s opening effort saw him rocket from two over par after seven holes to seven under by the time he reached the 18th tee.

That scoring burst – nine under for ten holes – was acknowledged as one of the greatest sprees in Masters history.

But Rose said his slow start had taught him not to panic when things were tough – and claimed it would also help him keep a lid on the high expectations raised by his storming start.

He needed a cool head again as he got off. To an even dodgier start yesterday.

The 2013 US Open champion played the first seven holes in three over par this time – and it could have been a lot worse.

He bogeyed the opening hole for the second day running, but after a birdie at the third he found himself gasping for air.

He was lucky to escape with a bogey on the par three fourth, suffered a dose of bunker trouble as he dropped another shot on the fifth, and made a total hash of the short sixth.

He was faced with a seventy feet uphill putt after finding the wrong side of the green – and a sixty footer for par after his first effort rolled almost all the way back to his feet.

He had to hole a seven footer to avoid a double bogey, and when another shot went at the seventh he had slipped to four under par.

The chasing pack were closing in and it became a three-way tie at the top, with Austria’s Bernd Wiesberger and Marc Leishman of Australia both making big moves.

Wiesberger enhanced his Ryder Cup hopes as a 66 took him from two over to four under par.

And Leishman, who set out at level par, climbed to five under, briefly grabbing the solo lead.

But Rose, 40, responded brilliantly, and head back on top of the pile after his birdie at 14.

That should have come as no surprise after his level-headed comments following his sensational first 18.

He said: “Managing expectations is going to be the trick the rest of the week.

“Obviously I’ve competed in these big tournaments quite a few times, and I’ve got one of them to my name, but we’re looking for more.

“But I’ve had some situations in my career that should stand me in good stead.”

Most read in Golf

Big-hitting Bryson DeChambeau also shot a 67 – which he reckons is about level par for him at Augusta.

He had been flirting with the cut line after a four over par 76 in the first round, but at one under he will be giving it a real lash over the weekend.

The unlikely duo who finished closest to Rose are diminutive left hander Brian Harman and Masters rookie Will Zalatoris – he will go out in the final group with the leader, as the first man in on six under.

Bulb aftercare- 4 ways to make sure bulbs reflower next year

What has Jessica Simpson said about her relationship with her dad Joe? 0