How Grace Kelly lost financial independence like Meghan, missed out on £40m and died with just £7,400 to her name

IT sounded like the classic fairytale ending – the stunning Hollywood actress who married a prince and lived a life of luxury in Monaco. B

Tyson Fury’s fortune rises from £6m to £40m in just one year.. and set to skyrocket even more after Anthony Joshua fight
Brits in their 30s set to be offered Covid vaccines ‘within DAYS after 40m Pfizer jabs deal’
Kate Middleton wore 'incredibly sentimental' £40m jewellery set at wedding to William

IT sounded like the classic fairytale ending – the stunning Hollywood actress who married a prince and lived a life of luxury in Monaco.

But Grace Kelly was forced to PAY £1.5m to Prince Rainier’s family – around £15million in today’s money – before walking down the aisle.

Grace Kelly as a Hollywood icon in the 1950s[/caption]

The dowry – a tradition in royal circles – boosted the coffers of the cash-strapped principality and wiped out her personal savings as well as a future inheritance.

Her marriage to Prince Rainier was the gateway to an enviable lifestyle but it also put an end to her stellar screen career, just as her box office draw reached its peak.

When she died in a car crash, at the tragically young age of 52, Grace’s will left just £7,400 and a derelict cottage in Ireland which once belonged to her grandparents.

In a new Channel 5 documentary, Grace Kelly: The Missing Millions, forensic accountant Gemma Godfrey delves into the iconic star’s finances, before and after marriage, and tots up the wealth she missed out on.

Shockingly, she concludes the star’s net worth should have been around £40million, regardless of any royal assets.

“Grace transitioned from a Hollywood star to a fashion icon and then a princess,” Gemma tells the Sun.

“She captured people’s imaginations and it looks like it’s a fairytale. But she faced sexual discrimination in Hollywood, then lost her financial independence as a result of her marriage.”

“Like Grace, Meghan is an American actress marrying into a European royal family, and struggling with the huge adjustment that brings,” she says.

“Both women were fiercely independent with successful careers before their marriages.

“It’s a huge transition to become part of an institution where it’s no longer about your own desires, it’s about serving the royal family, and your wishes are secondary.”

Meghan found transition from star to Princess difficult, like Grace[/caption]

Turned back on wealthy dad to act

Far from a rags to riches story, Grace was the daughter of a wealthy businessman and grew up in a Philadelphia mansion, waited on by servants.

But father Jack disapproved of her desire to become an actress and, at 18, she turned and moved to New York, paying her way through drama school by becoming a model.

Her successful career, in toothpaste and clothing ads, would have earned her the equivalent of £220,000 in today’s market.

Grace’s family home was a mansion in Philadelphia[/caption]

Grace’s big Hollywood break came at 23, when she was cast opposite Gary Cooper in High Noon.

Snapped up by movie giants MGM, Grace signed a seven year contract which gave the studio the right to three films a year, over seven years with a £15,000 bonus if she completed all three.

“She negotiated her own deal with MGM, and got them to agree that she could still live in New York and do theatre work, which was unusual.”

But under the studio system in the 1950’s, MGM had a huge amount of control, choosing her films, loaning her out to other studios at a 400 percent mark up and even setting her up with dates for publicity.

Grace got her big break in High Noon, with Gary Cooper[/caption]

Grace starred in a string of hit movies, including the Hitchcock classics Rear Window, Dial M for Murder and To Catch a Thief.

But the huge gender pay gap meant her leading men were often earning six times her wages – with Clark Gable earning £3,700 a week for his role in Mogumbo, to Grace’s £550.

A best actress Oscar win, for her role as the wife of an alcoholic played by Bing Crosby in the Country Wife, elevated her Hollywood worth even further in 1954.

Behind the scenes, Grace’s affairs with her older co-stars were becoming legendary.

She had flings with William Holden, Bing Crosby and Marlon Brando as well as High Noon co-star Gary Cooper, a married man 28 years her senior, and Ray Milland, who had been married 20 years.

She also admitted sleeping with her Magumbo co-star, commenting: “What else is there to do if you’re alone in a tent in Africa with Clark Gable?”

But after meeting Prince Rainier during a trip to the Cannes film festival, in 1955, her life changed forever.

Grace admitted to a fling with Clark Gable[/caption]

Grace wed Prince Rainier in a lavish wedding in Monaco[/caption]

Around 30 million people across the globe watched the ceremony, unaware of the hefty financial price Grace had paid in the dowry.

“Monaco wasn’t the glamorous principality it is today, so they needed the money,” says Gemma.

“But she had built up her wealth and her independence and that was wiped out.”

Ironically, it was Grace’s iconic image that turned Monaco into a fashionable playground for the super rich, bringing a huge amount of wealth to its marinas, casinos and high end hotels.

“Grace attracted millionaires to Monaco,” says Gemma. “She helped Monaco regain it’s riches, yet she had to pay for that privilege.”

In 1960, when dad Jack died leaving her £190,000, she was still paying – having borrowed against the inheritance for the dowry.

Royal marriage brought a life of luxury, with a 200 room palace, a chateau in France with grounds six times the size of Monaco, a ski chalet in Verbier and £4million yachts.

Her clothes were made by the best designers and the jewellery she wore, from Cartier and Van Cleef, cost tens of millions.

But in a telling clip from before her marriage, Grace is asked whether she will continue to act and carefully replies: “That decision will be made by the Prince.”

In fact, despite being wooed by Alfred Hitchcock for the lead in Marnie in 1964 and offered many other roles, she never acted again.

The Prince and Princess on board the royal yacht[/caption]

“Her one true love was acting,” says Gemma.

“She said in one interview she had just got a glimpse of the exciting career ahead when it was cut short.

“She may have thought she would return once she did her royal duty, and produced a family but, despite her worth soaring since the marriage, she never did.”

Grace had three children – Princess Caroline, 64, Prince Albert, 63 and Princess Stephanie, 56 – but by turning her back on Hollywood she lost out on a fortune.

By comparison, her contemporaries, Audrey Hepburn and Doris Day, went on to careers worth and estimated £75million and £150million respectively. 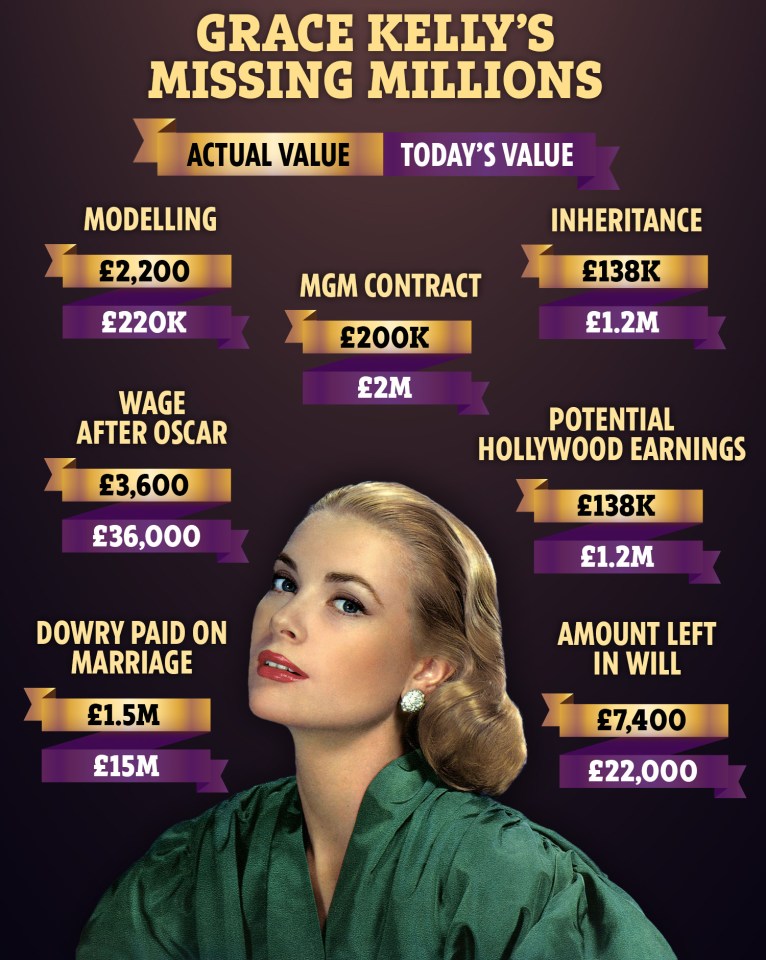 Tragic death and will mystery

On September 13, 1982, Princess Grace had a stroke while driving on country roads near one of the royal houses, losing control of the car and plummeting 120ft off a mountainside.

Daughter Stephanie, who was in the passenger seat, miraculously survived but Grace died in hospital the next day.

Her will, written in 1975 and seen by Gemma, left a few thousand dollars and the ramshackle Irish property to a bank trust in the US.

There was no mention of jewellery, family heirlooms or any money from her Hollywood heyday.

Gemma also discovered the existence of a separate will, held by the Grimaldi family but a request to view the document was refused.

But she says Grace was unlikely to have much cash in her own name.

“Any jewellery she owned would have been passed down to her daughters and daughter-in-law,” she says.

“But once she married, she wasn’t able to earn her own income.

“Again, there are parallels with Meghan because when you’re not earning your own money, you are more restricted on what you can spend.

“You’re being funded as a member of the royal family and you have to act in line with that.”

Princess Grace never publicly expressed any dissatisfaction with life and yesterday her son, Prince Albert, scolded Prince Harry and Meghan, for airing their grievances in the Oprah interview.

Most read in TV


Bill Roache, 88, forced off Corrie for months after falling ill

But like Meghan, Grace may have viewed her luxurious life as a gilded cage.

“Grace joined the royal family so she actively chose that lifestyle,” says Gemma.

“But it’s a stark difference from the life she had before, when she had freedom, control and financial independence.”

Lightning local lockdowns could be brought BACK to deal with Covid ‘hotspots’ emerging across Britain, minister says

Daim and Toblerone launch new chocolate cheesecakes – where to get

Lightning local lockdowns could be brought BACK to deal with Covid ‘hotspots’ emerging across Britain, minister says 0

Daim and Toblerone launch new chocolate cheesecakes – where to get 0

What did Lewis Capaldi say at The Brits? 0