The town of Paradise in California’s Butte County was all but completely wiped out as the state endured its worst-ever wildfires in September last year.

But they are nothing if not resilient, these Californians, and the message in Butte and the grape-growing territory heading south-west to Napa Valley is that it’s business as usual. 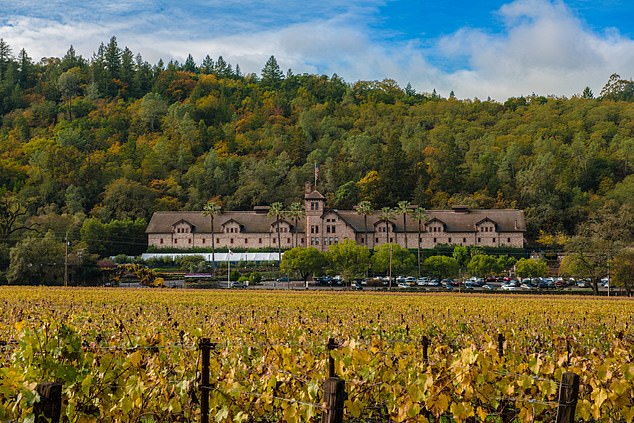 Quaint: California’s Culinary Institute of America outside the village of St Helena

Napa might only account for some four per cent of California’s wine production, but it welcomes 3.5 million visitors and contributes a remarkable £38 billion to the U.S. economy each year.

My first port of call is Calistoga, a small town at the top of the valley celebrated for its hot springs and geothermal baths. At a friend’s insistence, I head straight for the Calistoga Motor Lodge & Spa.

Here, I allow the charming Christel to slather my face in white kaolin clay and then plaster me with a paint brush from head to toe in French green clay. ‘You will feel won-der-ful!’ she exclaims.

Next stop is the CIA. No, not that one, silly, the Culinary Institute of America, housed in a forbidding former Christian Brothers building. It lies on the outskirts of St Helena, a town for which the epithet ‘quaint’ was invented. The main drag is crammed with neat little boutiques, galleries, bakeries and bistros. 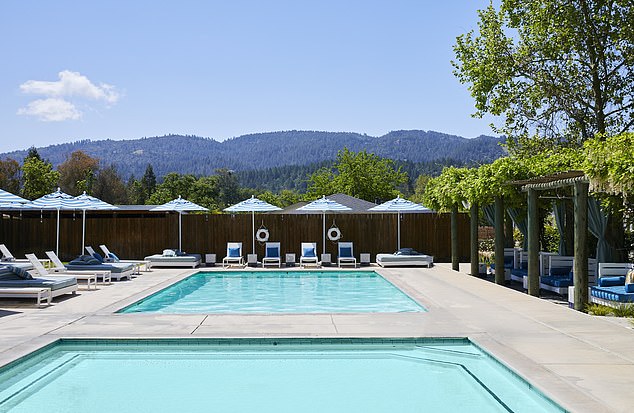 Relaxing: The pool at the Calistoga Motor Lodge and Spa at the top of Napa Valley

The CIA hosts all manner of courses for aspiring chefs, sommeliers and restaurateurs and serves a pretty fine lunch for visitors, too, in its Gatehouse Restaurant.

I fall in with Cindy and Cathy from Hannibal, Missouri. It’s their first time in Napa and they tell me they’re delighted to find a menu that doesn’t rely on deepfried catfish and onion rings.

‘At Bubba’s, our local, they sell onion rings by the foot,’ says Cathy. ‘You walk in and waddle out.’

There are almost 500 wineries in the region and most have excellent tasting rooms and beaming, California-sized welcomes. Some ask that you book ahead; at others, you simply pitch up with an inquiring thirst. 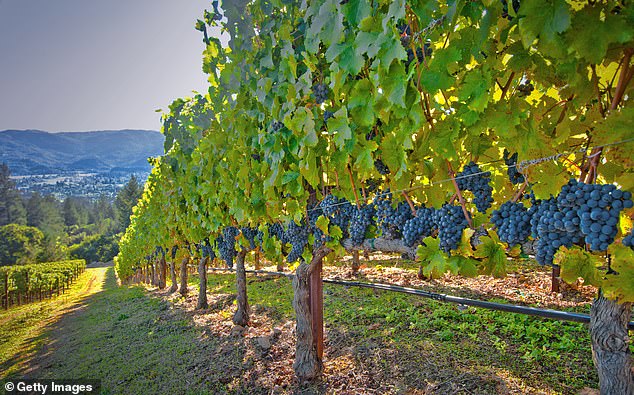 Golden state: A vineyard near Napa’s St Helena under the Californian sun

It would take months to visit every winery, so I pick just a handful based on the style of wines I like.

I drop in on Joseph Phelps Vineyards, Charles Krug Winery, Robert Mondavi Winery, Cakebread Cellars and Turnbull Wine Cellars to name a few and taste – or rather, drink – like a king.

I also dine well at Charter Oak in St Helena and, on Highway 29, at Mustards Grill, whose Truckstop Special – ‘Always meat, often potatoes, rarely vegetables’ – is a belt-straining delight.

So engrossed am I in my browsing and sluicing that I manage – idiotically – to miss my trip on the Napa Valley Wine Train and a balloon ride over the vineyards. There’s always next time.

Are the Cook Islands, in the Pacific Ocean with dreamy beaches, the most beautiful in the world?