HUNDREDS of ships are now queuing to get through the Suez Canal after it was blocked by a grounded mega ship, an amazing graphic shows. The cana

HUNDREDS of ships are now queuing to get through the Suez Canal after it was blocked by a grounded mega ship, an amazing graphic shows.

The canal is one of the world’s major trade routes and on average 50 ships pass through every day but traffic jams have now formed at both ends of the canal.

The Ever Given ship turned sideways in the Suez Canal yesterday morning, blocking all traffic at the busy waterway[/caption] 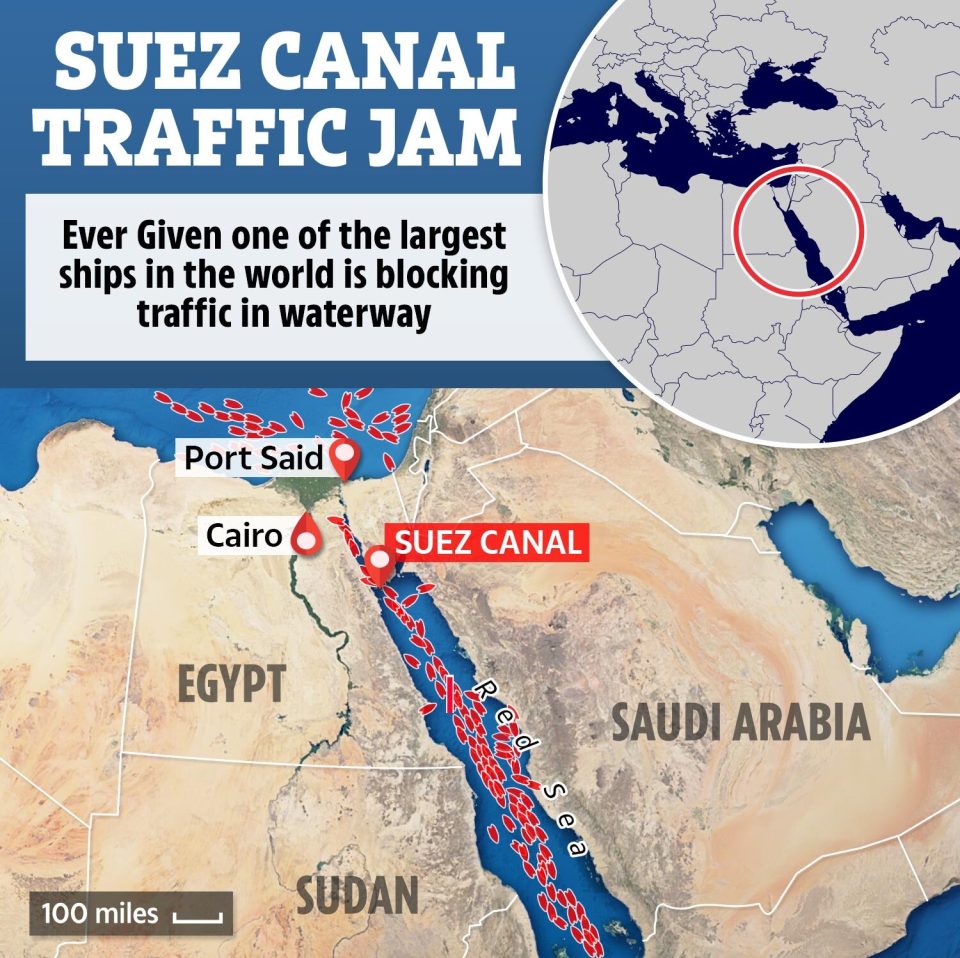 Roughly 30 per cent of the world’s shipping container volume transits through the 120 mile Suez Canal daily.

Large volumes of oil from the Middle East are also carried through the waterway and it has been estimated the ships queueing to get through the canal have 8.8 million barrels on board.

The blockage has caused a pile-up 150 ships attempting to enter the narrow channel, which divides Africa from the Sinai Peninsula in Northern Egypt, the MaritimeTraffic website shows.

Egypt’s Suez Canal Authority said it was trying to refloat the 1300ft long 194ft-wide Taiwanese ship – with the help of ten tug boats.

The authority a gale-force sandstorm, a common occurrence in the country’s Sinai desert at this time of year, blotted out light and limited the captain’s ability to see.

Five tug boats are currently working to try and drag the ship free.

Peter Berdowski, CEO of Dutch company Boskalis, which is trying to free the ship, said it was too early to say how long the job might take.

The ship’s bow and stern had been lifted up against either side of the canal, he explained.

“We can’t exclude it might take weeks, depending on the situation,” Berdowski told Dutch TV.

“We might have to work with a combination of reducing the weight by removing containers, oil and water from the ship, tug boats and dredging of sand.”

With millions of barrels are already stuck in boats waiting to enter the canal sparking the rise in global oil prices.

The giant ship looming over the canal[/caption]

Further impact on the oil and gas markets will depend on how long it takes to move the vessel, reports say.

GAC, a Dubai-based marine services firm, said the information it had received earlier claiming the vessel was partially refloated was inaccurate.

Pictures show a digger removing earth from the bank of the canal around the boat’s bow while satellite images show its diagonal position across the shipping lane.

Marine officials said they hoped traffic along the canal could resume but the giant vessel would have to be towed to another position.

Experts believe the congestion in the channel will cause disruptions even when Ever Given is freed.

Evergreen Marine Corp, a Taiwan-based company, said the ship had been overcome by strong winds as it entered the canal from the Red Sea[/caption]

Peter Sand, the chief shipping analyst with Bimco, said: “When the blockage is cleared, ships will race to make up for the lost time and that could be an issue for the arrival ports.”

Ranjith Raja, of data firm Refinitiv, said: “We’ve never seen anything like this before but it’s likely that resulting congestion will take several days to weeks to clear.

“It is expected to have a ripple effect on the other convoys, schedules and global markets.”

Expert Sal Mercogliano said the effect on world trade, including vaccine supply, could be “catastrophic”.

He told the BBC’s Today programme: “Because of Covid, you know how badly things have slowed down with moving goods, and now all of a sudden you add this and you’re going to have a delay getting goods to markets.

“Ten per cent of the world’s trade goes through the Suez Canal and you average about 50 vessels a day and we’re in the second day of not being able to move any vessels.

“Shipping companies are going to have to make a decision fairly soon whether or not to route the vessels around Africa, which adds and additional 12-14 days.”

What is the Suez Canal?

The Suez Canal is the quickest sea route between Asia and Europe and is one of the world’s most heavily used shipping lanes.

On average 50 vessels per day pass along the canal, although at times the number can be much higher.

The canal is 120 miles long, 672ft wide and 78ft deep meaning it can handle the world’s biggest ships, which take around 11 hours to pass through.

Ships have been grounded in the canal before and in 2017 a Japanese ship became stuck but was re-floated within hours.

The first canal was dug under the reign of Senausret III, Pharaoh of Egypt, who reigned from 1887-1849BC.

A new artificial waterway was planned by French engineer Ferdinand de Lesseps, which took 10 years to complete and opened in November 1869.Egypt nationalised the canal in 1956, prompting an invasion by shareholders Britain and France along with Israel.

The Suez Crisis ended only after Egypt sank 40 ships in the canal and the United States, Soviet Union and United Nations intervened, forcing Britain, France and Israel to withdraw.

The state-owned Suez Canal Authority was established in July 1956 and runs the waterway.

In 2015 Egypt extended the Suez Canal providing ships with a 22 mile channel parallel channel, allowing more vessels to use it

Dr Mercogliano, an ex-merchant mariner and professor of history, said the situation of a ship blocking the entire canal has never been faced before.

He said: “There have been groundings on the Suez Canal before but never one of a ship this size or so dramatic – literally shutting the whole canal down by crossing the entire width of the canal.”

The ship was on its way from mainland China to Rotterdam in the Netherlands when it became stuck.

Ever Given’s bow was touching the canal’s eastern wall, while its stern looked lodged against its western wall, according to satellite data from MarineTraffic.com.

Opened in 1869, the Suez Canal provides a vital link for oil, gas and cargo being shipped from East to West.

Some 19,000 boats passed through the canal last year, according to the Suez Canal Authority.

What was the original Van Der Valk theme tune? How the 2020 version compares to the 1972 original

How the United States Beat the Variants, for Now

What was the original Van Der Valk theme tune? How the 2020 version compares to the 1972 original 0

How the United States Beat the Variants, for Now 0

Weight loss: Lose weight without even trying with these fun lockdown activities 0

How to get rid of visceral fat: Ginger helps with blood sugar levels to burn belly fat 0

End of Android? Why new rival could have Google seriously concerned 0